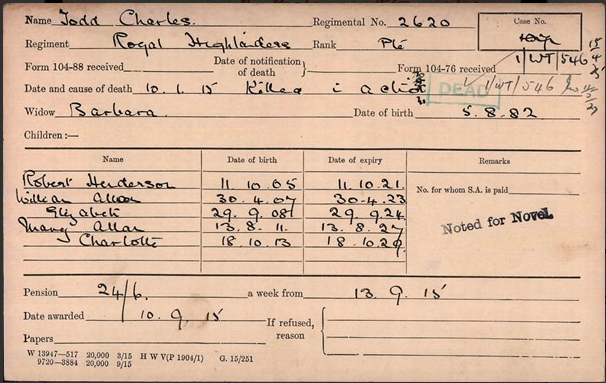 For reasons unknown this man is not listed on the original Dundee Roll of Honour.

3/2620 Pte Charles Todd 1st Bn Black Watch
Charles was born illegitimately to Elizabeth Todd a Domestic Servant in Broughty Ferry and his birth was registered at the nearby Registry Office in Monifieth on the 17th February 1885. At the age of 18, working in the Jute Industry and living in Caldrum Street Dundee he married Barbara Henderson of Lyon Street Dundee on 11 December 1903
Charles’s war was a very short one being deployed to the BEF on 1 Dec 1914 as part of drafts of replacements for the significant casualties the 1st Bn suffered in the 1st Battle of Ypres where they had excelled themselves on a number of occasions, not least at Polygon Wood and the infamous Black Watch Corner
It is not clear if Charles had served prior to the war but his enlistment number suggests he was embodied in the 3rd Bn (Reserve) Black Watch based at Queens Barracks, Perth before being drafted to the Regular Army 1st Bn
His arrival in the Bn would have been in the Ypres salient and shortly thereafter moved a few miles South in France in the area of Givenchy where he met his fate
On 10 Jan 1915, on 5 weeks or so after his arrival at the front, Charles was Killed in Action in the trenches at Givenchy where the Bn War Diary for 10th January records 2 ORs Killed. As was customary at the time OR casualties tended not to be named in War Diaries whereas Officers inevitably were. It seems likely Charles would have been laid to rest in a Battlefield grave which seems to have been subsequently lost and he is now commemorated on Le Touret Memorial
Charles left behind his wife Barbara and 5 children.

Can you tell us more about Charles Todd'? Some additional facts, a small story handed down through the family or perhaps a picture or an heirloom you can share online. Contact our curator...