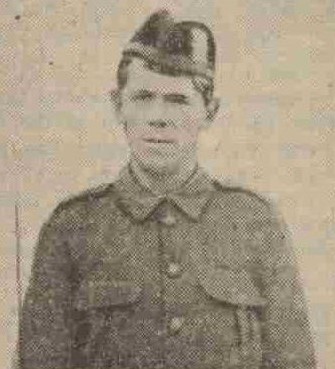 RECEIVED WHILE BRINGING IN THE WOUNDED

It has been officially reported to Mr and Mrs William Valentine, 106 Annfield Road, Dundee, that their eldest son,

Private James Valentine, 1st Black Watch, was killed in action in France on 9th May.  According to several of his comrades, Private Valentine did noble work on the day of his death.

In a letter to Mrs Valentine, Lance-Corporal S. Stark, 2nd H.L.I., states that he buried the Dundee soldier, who died of wounds on the morning after the great battle.

Deceased’s chum, Private F. M’Ewan, writes :–“The last I saw of Jim was when he was making towards our trenches after he had been wounded.  We were side by side in the charge, and I may tell you he was a proper hero, bringing in the wounded under heavy fire.”

Private D. M’Gregor, 1st Cameron Highlanders, in a letter to his sister, mentions that “James Valentine, of the Black Watch, did his duty anyway, carrying in the wounded under shell fire.”

Private Valentine, who was 26 years of age, joined the 3rd Black Watch about twelve months ago, but was transferred to the 1st Battalion in January, when he was drafted to the front.

Private James Valentine, 1st Black Watch, who, according to letters from several soldiers, sustained wounds while tending wounded under fire and died the following day.  Deceased was the eldest son of Mr and Mrs William Valentine, 106 Annfield Road, Dundee.

Can you tell us more about James Valentine'? Some additional facts, a small story handed down through the family or perhaps a picture or an heirloom you can share online. Contact our curator...