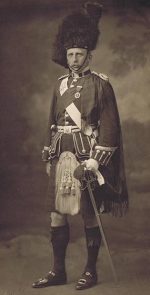 The latest news from the front shows that Colonel Harry Walker, the commanding officer of the regiment, has been severely wounded.  One communication to hand says that he lay twelve hours on the battlefield before he was brought in.  He was conveyed to a hospital at Merville, and there he still lies.  His condition is regarded as grave.

Colonel Harry Walker is a son of the late Mr J. H. Walker, Manufacturer, Caldrum Works.  He has all his life been connected with the jute trade, and was president of the Chamber of Commerce.  He has taken an active part in the public life of Dundee, including the Royal Infirmary, Victoria Hospital, Dundee Savings Bank, and other institutions.  Some years ago he was appointed a Director of the Caledonian Railway Company.  His connection with the old volunteers and Territorials extended over a long period.  He was an officer of the 1st City of Dundee Volunteers under the late Colonels Rankin and Hill, and on the retirement of the latter he assumed the command and attained great popularity as a commanding officer.

Colonel Walker Succumbs to his Injuries.

Dundee, with a wide circle beyond it, was thrilled yesterday by the news that Colonel Harry Walker, the gallant commander of the 4th Black Watch, had succumbed to his wounds.

He was severely injured in the trunk in the region of his abdomen, and from the first it was evident that the case was a hopeless one.

In the battlefield much is crushed into the space of a minute, and though he was observed by his comrades to fall, the position was shifted so swiftly that it is believed some time passed before the fallen officer was discovered on the battlefield and brought in.  He was conveyed with all haste to hospital, and died there on Monday morning.

The death of Colonel Walker brings up the total fatalities among the battalion officers to four, but there are probably five fatal cases, because news came to hand yesterday that Captain Stanley L. Watson was missing, and the message added that he was unofficially reported killed.

Can you tell us more about Harry Walker'? Some additional facts, a small story handed down through the family or perhaps a picture or an heirloom you can share online. Contact our curator...