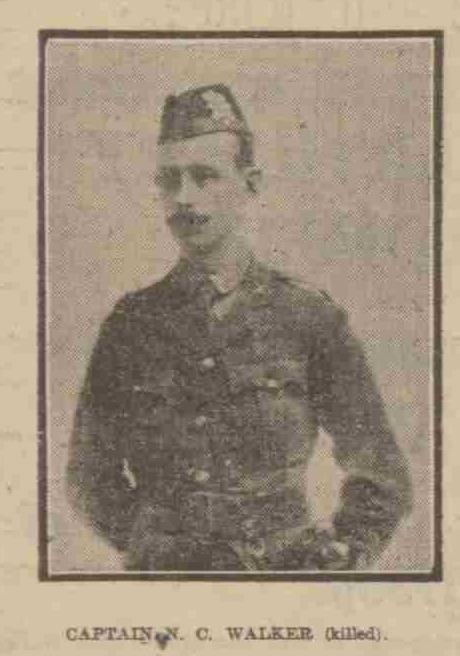 Norman has no known grave but is remembered on the Loos Memorial.

The wedding took place in Dunfermline Abbey on Saturday of Captain Crawford Walker, 4th Black Watch, son of Mr Robert C. Walker, solicitor, Dundee and Newport, and Miss Elsie Nairne Lee, elder daughter of the late Mr Charles Nairne Lee, Dunfermline.  In accordance with the wish of the young couple, little ceremonial was associated with the proceedings, and only a few relatives and most intimate friends attended as guests.

Captain Walker came home from France on Thursday.  He rejoins his regiment in the course of a few days.

Captain Norman C. Walker was a son of Mr R. C. Walker, solicitor, and he was also trained in law.  He returned from the front in July for a short holiday, and during his stay in this country he was married at Dunfermline to Miss Elsie Nairne Lee, elder daughter of the late Mr Charles Nairne Lee, Dunfermline.

“I am sorry to say I have bad news to give you about your son, Captain Norman Walker.  He is reported missing and unofficially reported killed.  From what the men have told me I fear there is little hope.  Please convey the news to his wife.

Two other officers and myself are all that are left.  The rest are killed, missing, and wounded.  I convey to you on behalf of the officers and men of the battalion their high appreciation of such a gallant officer and our great sorrow at losing him.”

Can you tell us more about Norman Crawford Walker'? Some additional facts, a small story handed down through the family or perhaps a picture or an heirloom you can share online. Contact our curator...