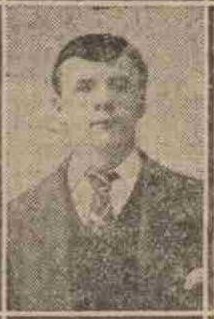 “HE WAS A BRAVE SOLDIER.”

“He was a brave soldier; he died for his King and country.”

Although hard hit by his death the mother of David Waterson, a Dundee member of the 2nd Black Watch, takes comfort from the thought that her son fills a hero’s grave.  The little eulogy of her boy was contained in a letter from an army chaplain informing her of David’s death in action on 22nd December last.

Private Waterson was wounded in the memorable engagement at Mons, and was invalided home.  When fit he was recalled to the firing line.  He was 36 years of age, and was connected with the gallant “Forty-Second” for twelve years.  Before the commencement of hostilities he was employed as a jute batcher by Messrs J. C. Duffus & Nephew, Garden Works, Benvie Road.  He lived in Ramsay Street.

His younger brother, Christopher Waterson, is also a soldier.  Christopher is 24 years of age, and is a member of the King’s Own Scottish Borderers.  When war broke out he was in India with his regiment, and in his last letter to his mother he said he was “on the high seas making for a destination to him unknown.

Can you tell us more about David Waterson? Some additional facts, a small story handed down through the family or perhaps a picture or an heirloom you can share online. Contact our curator...