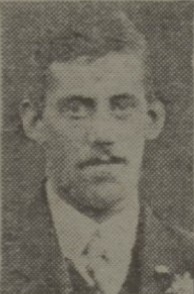 Alex has no known grave but is remembered on the Villers-Bretonneux Memorial. For more information on Alex, visit Alex’s Service Record.

Mr Robert Webster, 8 David Street, Broughty Ferry, has received official information that his son, Private Alex. Smith Webster, of the Australian forces, who has been missing since 31st August last, has been killed.  Deceased, who was 30 years of age, was employed at Panmure Bleachfield prior to emigrating six years ago.  He was a member of Broughty Castle Lodge of Freemasons.

WEBSTER—In loving memory of our dear brother, 4432, Private Alexander S. Webster, Australian Imperial Force, who was killed in action on 31st August 1916. – Inserted by his sisters.

Can you tell us more about Alexander Smith Webster'? Some additional facts, a small story handed down through the family or perhaps a picture or an heirloom you can share online. Contact our curator...