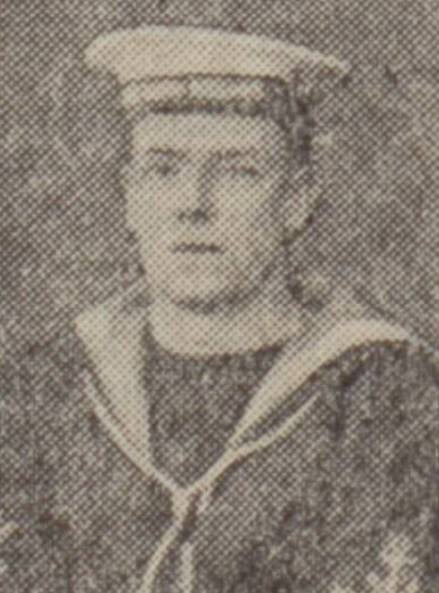 On 6 October 1914, The Courier reported that P.O. David Millar Williamson, H.M.S. Hogue, missing since 22 September, was now officially reported as having been killed in action.
The eldest son of Richard and Annie Ferguson Williamson, 101 Ancrum Road, David had been in the Royal Navy for some thirteen years.
On the morning of 22 September, Hogue, an armoured cruiser of some 12,000 tons, and her sister ships, Aboukir and Cressy, encountered the submarine U-9. Aboukir was torpedoed at 06.20 but her Captain was under the impression that she had struck a mine. As Hogue closed to assist she was struck by two torpedoes at 06.55, capsizing ten minutes later. Cressy unsuccessfully attempted to ram the submarine, and resuming rescue attempts was also torpedoed at 07.20. In all, 62 officers and 1,397 men were lost.
P.O. Williamson is commemorated on the Chatham Memorial, Kent.

LOCHEE HOME MOURNS LOSS OF SON WHO WENT DOWN WITH H.M.S. HOGUE. A Lochee home is mourning the loss of a son who went down to his death with the ill-starred cruiser Hogue.
After a fortnight’s anxious waiting Mr Richard Williamson, 101 Ancrum Road, Lochee, has received a message from the Admiralty that, as no news has been heard of his son David, who was a leading torpedoman on board H.M.S. Hogue, it must be concluded that he went down with the ship.
Leading Torpedoman Williamson was a splendid type of the British navyman. Broad shouldered and genial, he was a favourite wherever he went. Amongst his shipmates he was especially respected.
He joined the Navy thirteen years ago, at the age of seventeen. At the time of the recent manoeuvres he was undergoing training on H.M.S. Vernon at Portsmouth for a torpedo-instructorship. During the manoeuvres he was transferred to the Hogue, and he had not left that vessel when war was declared.
He was a first class petty officer.
Much sympathy is being expressed with his parents in his loss. His younger brother Andrew is also in the Navy. The Courier, Tuesday, 6 October 1914, 4.

Can you tell us more about David Miller Williamson'? Some additional facts, a small story handed down through the family or perhaps a picture or an heirloom you can share online. Contact our curator...