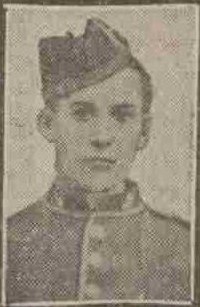 Robert has no known grave but is remembered on the Le Touret Memorial. He was the brother of Pte David Wright, 2818, 5th Battalion Black Watch, who died of wounds, 08.09.1916.

AND CONVEYS NEWS TO DECEASED’S WIFE.

To witness his brother, Pte. Robert Wright, a Dundee member of the Black Watch, being shot through the heart was the experience of Pte. Allan Wright.

In a letter written by the latter—also a member of the 1st Black Watch—to deceased’s wife, who resides at 307 Hilltown, Dundee, he says :– “ I am sorry to tell you that Bob was killed on the afternoon of the 26th January.  He was shot through the heart and fell dead—not a word crossing his lips.  I have photographs which were in his possession of the two children.  The bullet went right through the cards, which were in his breast pocket at the time of his death.  A friend of mine buried him.”

Pte. Wright was employed as a carter with Messrs Mackay & Robbie, and later worked for a time in one of the Fifeshire collieries.  Deceased has two other brothers, Frederick and David, serving with the colours.  He is survived by a widow and two young children.

Can you tell us more about Robert Wright'? Some additional facts, a small story handed down through the family or perhaps a picture or an heirloom you can share online. Contact our curator...