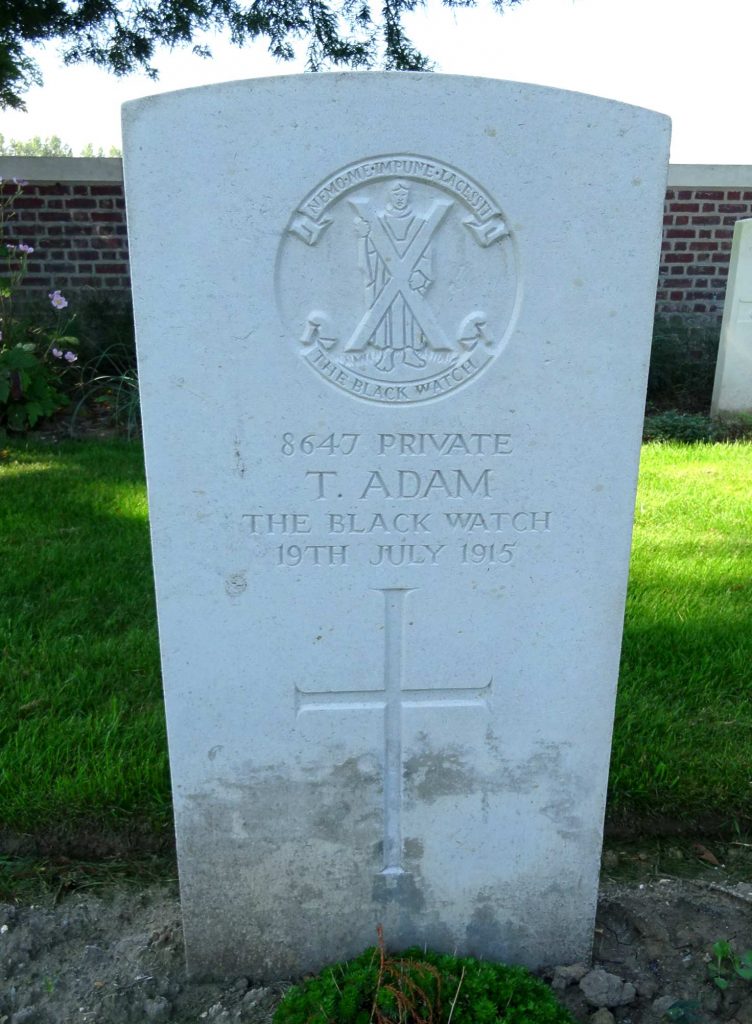 Lance Corporal Adam previously served in the Scots Guards throughout the Boer War. He enlisted in April 1915 and died only three months later by a stray bullet while in the trenches. His officer, who was standing by him when he was shot, said:- “The regiment has lost a good soldier, and I have lost one of my best men.” at the time of his death he was aged 37. He was married with one child.

Official word has been received by Mrs Adams, Yukon Cottage, Ireland Street, Carnoustie, that her husband, Private Thomas Adams, 2nd Black Watch, was killed by a stray bullet.  Second Lieutenant Dudley C. Stuart Smith, writing to Mrs Adams under the date of 23rd July, says :― “It is with deepest regret that I have to write to tell you of the death of your husband. I am the officer commanding his platoon, and I was standing by him when he was shot.  A stray bullet hit your husband in the right lung.  He never regained consciousness, and fell dead within five minutes.  It will be of some consolation to you to know that he died without suffering pain.

The regiment has lost a good soldier, and I have lost one of my best men, who was always ready to turn his hand to anything.  Rear assured of deepest sympathy.”

Private Adams, who was 38 years of age, had seen much active service, having served with the Scots Guards through the whole of the South African War.  His time as a reservist had expired, but he re-enlisted on 9th April.  He leaves a widow and one child.

Can you tell us more about Thomas Adam'? Some additional facts, a small story handed down through the family or perhaps a picture or an heirloom you can share online. Contact our curator...