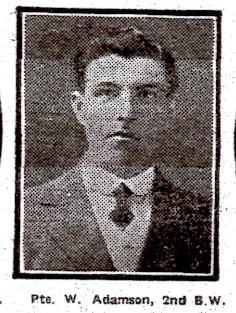 BURIAL OF SOLDIER SON AT BOULOGNE.

MOVING SCENES IN THE FRENCH TOWN.

Mrs William Adamson, 42 North George Street, Dundee, has just returned to the city from Boulogne, where a few days ago she had the mournful duty of attending the funeral of her eldest son, Private William Adamson, of the 2nd Black Watch, who died from wounds in hospital there.  Recently Mrs Adamson lost her second son, Private David Adamson, of the 2nd Scots Guards.  He was killed in action on 14th June.

Private William Adamson, 2nd Black Watch, was wounded in the back by a shrapnel bullet on 9th May, and was removed to hospital at Boulogne.  Some weeks later Mrs Adamson received a telegram stating that he was in a critical condition, and that she could, if she wished, visit him in the hospital.  She left Dundee on 21st May, and arrived at the hospital on the following day.  William’s condition seemed to improve while she was with him, and after ten days’ stay in the town Mrs Adamson returned to Dundee, her son then being considered to be progressing most favourably.

On 26th July, however, she was again summoned by telegram to her son’s bedside, and on the following day she again set out for France.  Five days after her arrival at Boulogne her son passed away.  He was buried with military honours in a beautiful cemetery on Tuesday last, and Mrs Adamson attended the last rites.

The Scenes in Boulogne

Mrs Adamson related a story full of pathos to the “Courier” last night regarding her experiences at Boulogne.

On her first visit she attended the funeral, along with his wife, of Private John Saunders, who was wounded on 27th April.  He resided at Cathkin Avenue, Rutherglen.  Boulogne, said Mrs Adamson, is a peaceful town with little industry, and the only thing to break the quietness was the arrival of trains with the wounded and the constant movement of Red Cross waggons.  As many as thirty to forty ambulances would pass along the street at a time, each bent on and errand of mercy.  Most of the hospital trains arrived during the night, and one morning on looking from her café across the street towards the hospital she saw lined up in front of the building about thirty ambulance waggons, each containing four wounded heroes.

From the conversations which passed in hospital between one wounded soldier and another Mrs Adamson was convinced that the spirit of the men was one of sheer determination to fight to a finish in order to see the great campaign brought to a successful issue.   The soldiers’ conversations were mostly of a cheery nature, but nevertheless the serious aspect of the war was being constantly recalled by the relating of thrilling incidents in which many brave fellows had fought their last fight.

“Do you mind, Jock,” one soldier remarked, “when I was near awa’ wi’ it?”  The speaker then went on to tell how a bullet had whizzed narrowly past, killed a comrade by his side, and continuing in its course, just missed a third soldier, and ended the life of a fourth.

One extremely touching incident was witnessed by Mrs Adamson.  A soldier was brought into the hospital badly wounded about the head, and after his wounds had been dressed, he asked, “Where am I?” and in a weak voice requested to see his mother and sister.  He died next morning.  One officer lying in the hospital had received no fewer than thirteen wounds.

Mrs Adamson during the course of her visits was treated by everyone – matrons, sisters, nurses and surgeons – with the greatest courtesy and kindness, and her son, who was able to speak to her until about two hours before his death, spoke highly of what had been done to comfort him.  No adequate praise could be accorded those who were working so strenuously to alleviate the suffering’s of the wounded.  A striking feature of the life in the hospital was the cheery, optimistic spirit predominant amongst the men.  Never was a complaint heard, and grumbling was unknown.

Mrs Adamson left Boulogne by the afternoon boat on Tuesday, and arrived in Dundee on Wednesday.  Private Wm Adamson was thirty years of age, and a reservist.  He was employed as a mill foreman in Champdanny Jute Mills, Calcutta, but had been there only three months when he was recalled to his regiment, in which he had served for nine years.  He went to France with the Indian Expeditionary Force.

Can you tell us more about William Adamson'? Some additional facts, a small story handed down through the family or perhaps a picture or an heirloom you can share online. Contact our curator...