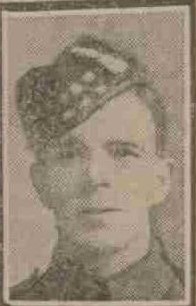 Mrs Blake, who resides at 3 Hilltown, Dundee, has been officially informed that her brother, Private Robert Aiken, Royal Scots Fusiliers, has been missing since 30th July.  Private Aiken, who is twenty-five years of age, had only been a month at the front, and had barely had his baptism of fire.  Previous to enlistment he was employed as an under-tenter.  Private Aiken was also a prominent member of St Margaret’s Brass Band, Lochee, having been a cornet player in that combination for seven years.  Recently it was announced that he had won the first prize and two first class certificates for jute spinning in the Dundee Technical College examination.

Can you tell us more about Robert Aiken'? Some additional facts, a small story handed down through the family or perhaps a picture or an heirloom you can share online. Contact our curator...