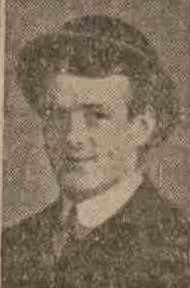 Robert has no known grave but is remembered on the Le Touret Memorial. He was the brother of Pte William Aikman, 1001057, 43rd Battalion Canadian Infantry, who also served and returned home safely.

EAGER TO BE BACK AGAIN.

Private Robert Aikman, a Black Watch Reservist, has written home to his mother, who lives at 22 Catherine Street, Dundee stating that he had been “wounded in the great battle of the 14th of this month.”

Private Aikman, who was an employee of the “Courier,” lies in a Bristol Hospital with a bullet wound in his right shoulder.  In his message to his mother he states that the bullet has been extracted, and that he is getting on well towards recovery, and eager to get back into the fighting again.

Writing to a friend, Private Aikman describes the fighting as “simply murder,” and states that the Black Watch and King’s Own Scottish Borderers were badly cut up.

The information was received by his parents, who reside at 22 Catherine Street, Dundee, in a letter written by Lieut. W. M. Oswald, of the same regiment.  Lieut Oswald states that Private Aikman was shot through the head on 19th April while on outpost duty, and died three hours later without regaining consciousness.

Private Aikman was previously wounded by a bullet in the left shoulder on the 14th September, 1914, and was home on leave for three weeks.  He was a reservist, and was employed in the despatch department of the “Courier” Office.

Private Aikman was a member of Ogilvie U.F. Church, and at the Communion service yesterday the Rev. Dr H. F. Henderson made feeling reference to his death.

Can you tell us more about Robert Aikman'? Some additional facts, a small story handed down through the family or perhaps a picture or an heirloom you can share online. Contact our curator...