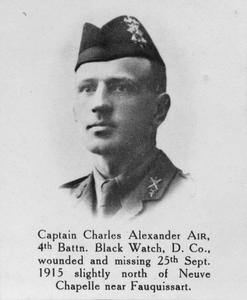 Charles has no known grave but is remembered on the Loos Memorial.

Captain A. Air is the second son of Mr David Air, Dunmore, Dundee.  When war broke out Mr Air quickly offered himself for service, and proved himself such a competent officer that his promotion was rapid.  He was associated with his father in business, and took an active part in political work.

AND BELIEVED TO HAVE BEEN KILLED.

Captain Charles Air is the younger son of Mr David Air, and Joined the 4th Black Watch after the outbreak of war and went to the front in the summer.  Well known and highly respected amongst a large circle of acquaintances, Captain Air took a great interest in athletics, and was a clever exponent of Rugby football and cricket.  He had played for the Panmure Rugby Club and the Balruddery Cricket Club.  In public life he was beginning to take his place and had rendered appreciated service as a Director of Dundee Dental Hospital.

Can you tell us more about Charles Alexander Air'? Some additional facts, a small story handed down through the family or perhaps a picture or an heirloom you can share online. Contact our curator...