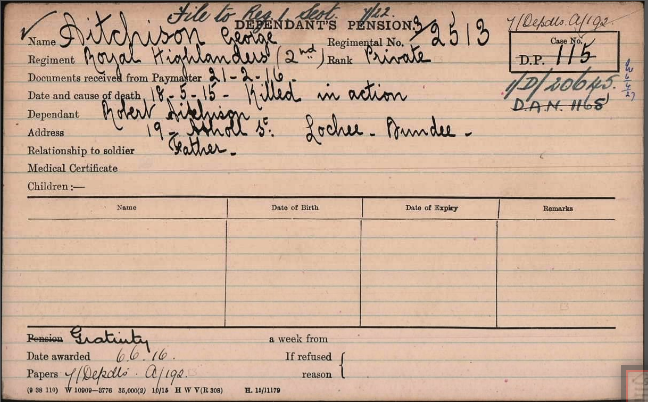 George has no known grave but is remembered on the Le Touret Memorial.

Private Aitchison was killed on 18th inst., and in notifying his father of his death Lieutenant Hutchison says :–

“It is with great regret that I have to inform you that your son, Private George Aitchison, was killed on Tuesday, 18th inst.  We were being subjected to a heavy shell fire, and one of the shells, striking a branch of an overhanging tree exploded and killed your son.  He was killed outright—would feel nothing whatever.  He was a good soldier, and one in whom I had every confidence.  His comrades join me in expressing our united sympathy with you in your bereavement.

Private Aitchison was in his twenty-second year.  He joined the Forty-Second thirteen months ago, having been previously employed in Camperdown Works, Lochee.

Can you tell us more about George Aitchinson'? Some additional facts, a small story handed down through the family or perhaps a picture or an heirloom you can share online. Contact our curator...