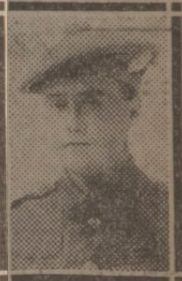 Mr John Aitken, Roseneath, Wormit, has received official intimation that his son, Private John Aitken, Royal Scots Fusiliers, has been reported missing since 30th July.  Private Aitken was 27 years of age.  He joined the Royal Scots in March of this year, and on going to the front was transferred to the Fusiliers.  He had only been in France a few weeks when he was reported missing.  An old Wormit and Dundee High School boy, Private Aitken was a general favourite with his companions.  He took a keen interest in lawn tennis.  He was employed with the firm of Polack & Co., Dundee, prior to enlistment.

The fate of Private John Aitken, Royal Scots, son of Mr John Aitken, Roseneath, Wormit, has now been definitely decided by an announcement from the War Office stating that he had been killed in action.

Private Aitken took part in the great offensive on the Somme last year, and on 30th July last was reported missing.

Private Aitken was well-known in football circles in the district, having played for Newport and Broughty Ferry football clubs, and was latterly an active member of Wormit Lawn Tennis Club.  He was also a member of Newport Volunteer Corps.

Prior to enlistment Private Aitken was in the office of Messrs Polack & Company, Albert Square, Dundee.  Another son, Private James Aitken, a well-known Dundee vocalist, is serving with the Black Watch.

Can you tell us more about John Aitken'? Some additional facts, a small story handed down through the family or perhaps a picture or an heirloom you can share online. Contact our curator...