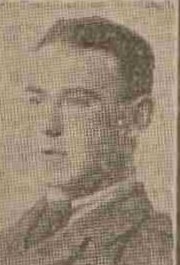 Alexander has no known grave but is remembered on the Vis-En-Artois Memorial.

“He was the best P.O. I have ever known.”  Was how an officer testified to the ability of P.O. Alexander M. G. Alcorn, R.N.D., who was killed in action on 27th September.  Deceased, who was a son of Mr and Mrs John Alcorn, 4 Stewart Street, Lochee, was 24 years of age.  The officer adds :–“He was going round cheering up the men prior to going over the top when a shell landed in the same traverse and killed him instantaneously.  He had done exceedingly good work with the company, and his death is mourned by all ranks.”  Mr Alcorn has one son serving in France and another in England.

Can you tell us more about Alexander Menzies Gilchrist Alcorn'? Some additional facts, a small story handed down through the family or perhaps a picture or an heirloom you can share online. Contact our curator...