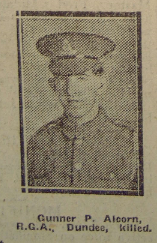 News has been received that Private John Alcorn, Royal Garrison Artillery, has been killed in action.  Private Alcorn, who was only 20 years of age, was called up as a Territorial when war was declared.  He was the second son of Mr and Mrs John Alcorn, late of Alyth, and now of Mortimer Street, Dundee.  He was a baker to trade.

Can you tell us more about John McLauchlan Alcorn'? Some additional facts, a small story handed down through the family or perhaps a picture or an heirloom you can share online. Contact our curator...