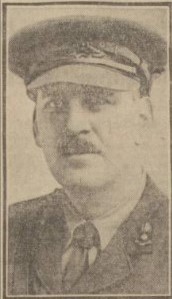 A large circle of friends in Dundee will learn with regret of the death, which occurred this morning at his residence, 3 Windsor Place, of Major Charles Alexander, V.D., late commanding officer of a detachment of the Royal Field Artillery (Highland Brigade).  Early this year, Major Alexander contracted a serious illness while in camp, and he had been laid aside for eight or nine months.

Major Alexander, was the only son of the late William Alexander, city architect, Dundee, and was educated at the High School.  He was eighteen years in India, an commercial assistant in the service of the Barnagore Jute Company, and both at home and in India he took an active part in the Volunteer movement.  He was connected for a few years with the old 1st V.B.R.H., and during the whole course of his eighteen years residence in India he served in the Cossipore Artillery Volunteers, rising to the rank of honorary lieutenant-colonel.

Major Alexander came home from India in the latter part of 1914, and early in 1915 he joined the Royal Field Artillery as commanding officer of a detachment.  Major Alexander was a man of genial and warm-hearted disposition, and is survived by a widow.

Can you tell us more about Charles Alexander'? Some additional facts, a small story handed down through the family or perhaps a picture or an heirloom you can share online. Contact our curator...