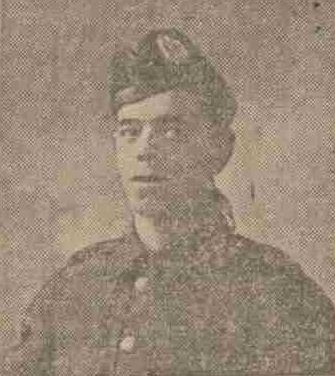 Mrs Allardice, who resides at 12 Session Street, Dundee, has received the sad intelligence that her son, Private Charles Allardice, Cameron Highlanders, has been killed in action.  Private Allardice was 22 years of age, and was in civil life an apprentice electrician.  He enlisted at the outbreak of war, and had been at the front for many months.

In a letter from his platoon commander Private Allardice is described as “one of the best men in my platoon. And I whom I could always have full confidence.”  He adds that it may be some consolation to his parents to know that the advance in which he played his part so well was very successful.

Mrs Allardice has reason to be proud of her sons.  Other four are serving their King and country, and all have seen active service.  William, in the Scottish Horse; Arthur, in the Royal Scots; and Robert, who is in the Highland Light Infantry, have all been wounded.  The other son, James, is in the Navy.

Can you tell us more about Charles Allardice'? Some additional facts, a small story handed down through the family or perhaps a picture or an heirloom you can share online. Contact our curator...