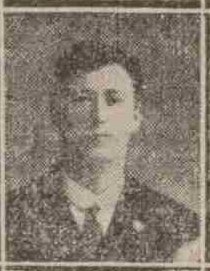 William was serving aboard the S.S. Therese Hayman which sailed from the Tyne on 25th December 1914 on voyage to Savona, Italy with a cargo of coal when she disappeared without trace. The ship was not officially classed as missing/untraced until 3rd March 1915, though it is believed she was one of several ships mined off Filey around Christmas time. No wreckage or any bodies from her 21 crew were ever found.

Grave fears are entertained regarding the safety of Mr William Allardyce, a Dundee young man, who was third engineer on board the West Hartlepool steamer Therese Heymann, which is reported missing on a voyage from Shields to Savona.

Mr Allardyce, who is only 24 years of  age and resided with his parents at 85 Hilltown, left Lilybank Foundry to join the steamer, which sailed from Shields the last week in December, and has not since been heard of.  A particularly pathetic circumstance is that this was Mr Allardyce’s first voyage.

Communication with the owners of the vessel, Messrs Ropner & Son, elicited the information that they had no news whatever of the ships whereabouts, and that the disappearance of the steamer is to them a complete mystery.

Additional information regarding the vessel, supplied by Gary Thomson and Michael Caldwell

Can you tell us more about William Nicoll Allardice'? Some additional facts, a small story handed down through the family or perhaps a picture or an heirloom you can share online. Contact our curator...