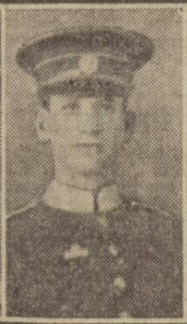 Alfred has no known grave but is remembered on the Thiepval Memorial.

Second-Lieutenant Alfred Allan, Highland Light Infantry, killed in action, was the fourth son of the late Mr Thomas Allan, stationmaster, West Newport.  He commenced his career in the service of the North British Railway Company at Tay Bridge Station, Dundee.  He obtained an important appointment in Chile six years ago.

Immediately on the outbreak of war Lieut. Allan returned to this country, and joined the Sportsman’s Battalion of the Royal Fusiliers.  While serving with his regiment he obtained a commission on the field.  Lieut. Allan was one of the best-known figures in Tay boating circles, and held the sculling championship for a number of years.

Can you tell us more about Alfred Allan'? Some additional facts, a small story handed down through the family or perhaps a picture or an heirloom you can share online. Contact our curator...