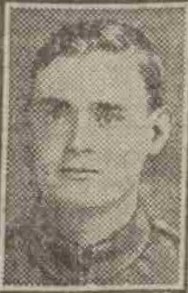 Andrew is believed to be the brother of Gunner William Rattray Anderson, 49341.

Private Anderson, who was about 21 years of age, enlisted in the Royal Engineers, and was attached to the Sherwood Foresters.  He went to the front in January of this year.  One of Mrs Anderson’s sons has been discharged, while another is still in France.

Can you tell us more about Andrew Peter Anderson'? Some additional facts, a small story handed down through the family or perhaps a picture or an heirloom you can share online. Contact our curator...