We need you to tell us more about the life and times of George M. Anderson 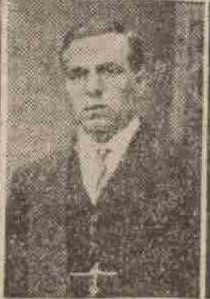 George has no known grave but is remembered on the Loos Memorial.

A Dundee member of the Black Watch who was awarded the Distinguished Conduct Medal for bringing in twelve wounded comrades and warning others has been killed in action.

The parents of Private George M. Anderson, who reside at 80 Hawkhill, Dundee, have received official intimation of his death on 25th September

The official description of the deed which won deceased the coveted honour is as follows:–

For conspicuous gallantry and devotion to duty on 9th May, 1915, at Richebourg, when, in broad daylight, he went out and warned several wounded men lying in front of the trench that a bombardment was about to commence.  He then crawled back a distance of over 100 yards in full view of the enemy, bringing in an officer who was wounded and unable to move.  Before nightfall he brought back three more severely wounded men, and during the night he brought in no fewer than eight more wounded men.  These rescues were carried out under heavy rifle, machine gun, and shell fire.

Private Anderson’s parents have received a watch from the officer whom their son carried to safety.

Private Anderson, who was 27 years of age, was in America when war broke out.  He came home in February last and re-enlisted in his old regiment, having previously served eight years in the 1st Black Watch.  He was in India with the regiment for several years.  Deceased left for America about three years ago, and was employed in the vicinity of Chicago.  Before leaving Dundee, he was employed by Lindsay & Low, Ltd., Carolina Port.  Private Anderson was previously reported wounded and missing.  His brother Alexander is a member of the 1st H.L.I., and has been wounded, but is now ready to return to the front.  John, his eldest brother, is a sergeant in the 10th Black Watch, having enlisted at the outbreak of war.  He previously served for 21 years in the 1st Battalion.

Can you tell us more about George M. Anderson'? Some additional facts, a small story handed down through the family or perhaps a picture or an heirloom you can share online. Contact our curator...