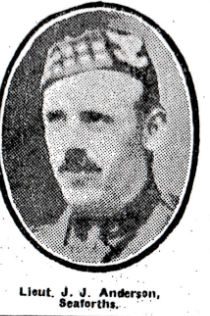 For reasons unknown this man is not listed on either C.W.G.C. or S.D.G.W. but is listed on the Scottish National War Memorial. He is recorded as having died of wounds but his burial place is not known. According to his Medal Index Card it would appear the James initially enlisted as a Private with the Royal Army Medical Corps, Reg No 892.

Can you tell us more about James Johstone Anderson'? Some additional facts, a small story handed down through the family or perhaps a picture or an heirloom you can share online. Contact our curator...