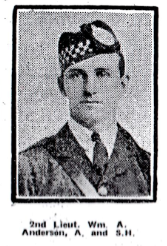 Second-Lieut. William Angus Anderson, 5th Argyll and Sutherland Highlanders, son of the late Mr James T. Anderson and Mrs Anderson, 23 Scott Street, Dundee, has died from influenza in France.  Lieut. Anderson was returning to rejoin his unit in Egypt when he took ill and died.  He was only married six weeks ago, and his widow resides at 28 Forest Park Road.

Deceased, who was 25 years of age, received his commission in Egypt about four months ago.  In civil life he was employed in the Procurator Fiscal’s office at Dundee, before he went to take up a similar appointment in Glasgow.  Two brothers are serving, one of whom is at present home on leave.

Can you tell us more about William Angus Anderson'? Some additional facts, a small story handed down through the family or perhaps a picture or an heirloom you can share online. Contact our curator...