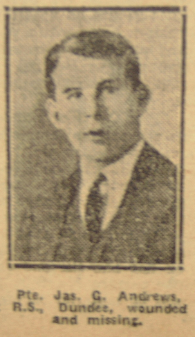 Dundee soldier posted as missing in April, Private James G. Andrews, Royal Scots.  Private Andrews, whose mother resides at 116 Blackness Road, Dundee, had been at the front for almost a year.  He is 24 years of age, and enlisted early in 1916.  Prior to that he was employed by Thomson, Shepherd, & Co., Ltd., Seafield Works, Dundee, and lodged with Mrs Downie, 39 Miller’s Wynd.

Can you tell us more about James George Andrews'? Some additional facts, a small story handed down through the family or perhaps a picture or an heirloom you can share online. Contact our curator...