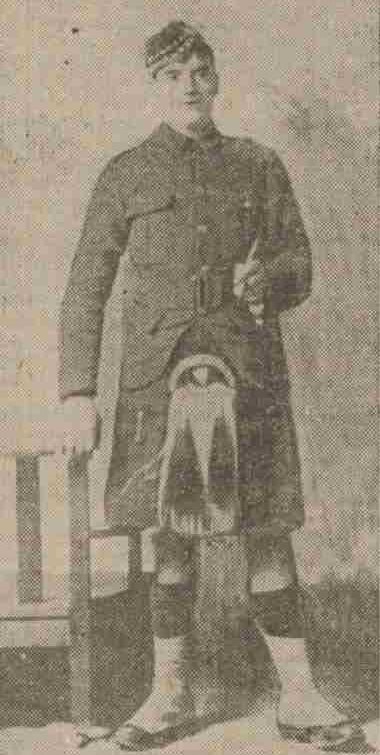 Lance-Corporal William Angus, of the 4th Gordon Highlanders, who has died from wounds on July 19 in France, leaves a widow and two children, who reside at 25 Lilybank Road, Dundee.  Mrs Angus has received a sympathetic letter from Captain Charles Reid, the officer commanding C Company, to which deceased belonged, in the course of which he says :—“Please accept my heartfelt sympathy in your great loss.  Your husband was with  me in the trench at the time he was hit by the shell, and I hoped at that time it would not prove fatal.  He has done splendid work for his battalion and for his country, and I feel I have lost a friend.  He was a fine example to the men in coolness and indifference to all danger.”

Lance-Corporal Angus was a native of Dundee, and his parents reside at 98 Albert Street.  For the past nine years he had been employed by the Northern Agricultural Company, Aberdeen.  On the outbreak of war he re-enlisted in the 4th Gordons, in which Territorial battalion he had previously served, and went to France on 19th February with the first draft.

Mrs Angus belongs to a military family.  Her father is Colour-Sergeant Peter Anderson, a pensioner of the Gordon Highlanders, who is now doing military hospital duty at Kincardine O’Neil,  and her eldest brother is Acting-Company-Sergeant-Major Gavin Anderson, of the Black Watch, at Nigg.

Can you tell us more about William Angus'? Some additional facts, a small story handed down through the family or perhaps a picture or an heirloom you can share online. Contact our curator...