We need you to tell us more about the life and times of Thomas S. Annand 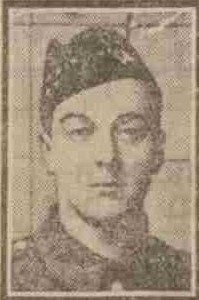 “He died at his post of duty,” is the tribute paid by an officer to Private Thomas  Annand, Seaforth Highlanders, son of Mr and Mrs Annand, 149 Alexander Street, Dundee.  Private Annand, who was 20 years of age, enlisted in 1915, and had been fourteen months in France.  He was previously employed by Malcolm, Ogilvie, and Co., Ltd., Constable Works, Dundee.

Can you tell us more about Thomas S. Annand'? Some additional facts, a small story handed down through the family or perhaps a picture or an heirloom you can share online. Contact our curator...