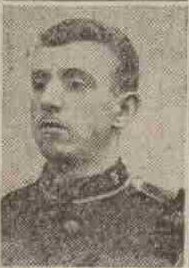 The death is reported of another prisoner of war in Germany who belonged to Dundee.  Deceased is Private William Arthur, 1st Black Watch, eldest son of Mr Wm. Arthur, 48 Small’s Wynd.  Death is understood to have occurred between 19th and 21st June.  Private Arthur had served in the South African campaign, and re-enlisted on the outbreak of war.  Private Arthur was posted missing some time before the news of his death was received.

Intimation has been received in Dundee that Private W. Arthur is missing from the Black Watch.

Arthur, who is a man over thirty years of age, was called up as a reservist, and served in the Boar War and in India when he was attached to his regiment.  In Dundee he was employed with the North British Railway Company, and is the son of Mr William Arthur, retired gardener, living in Small’s Wynd, Dundee.

PRISONER OF WAR DIES IN GERMANY.

All doubt as to the fate of Private William Arthur, 1st Black Watch, has been removed by the receipt of an official communication announcing his death.  Private Arthur, who resided at 48 Small’s Wynd, Dundee, was a reservist, and went to the front in August.  He was reported missing after the Battle of the Aisne on 14th September, but turned up later, a letter being received from him dated 23d October.  Since then, however, nothing has been heard of him, and the War Office now intimate that he died a prisoner of war between 19th and 21st June.  Deceased, who was 38 years of age, was unmarried, and before re-enlisting was employed at Tay Bridge Railway Station.  He had almost 18 years’ service with the colours, eight of which were spent in India.  He served during the whole of the South African campaign.

Can you tell us more about William Arthur'? Some additional facts, a small story handed down through the family or perhaps a picture or an heirloom you can share online. Contact our curator...