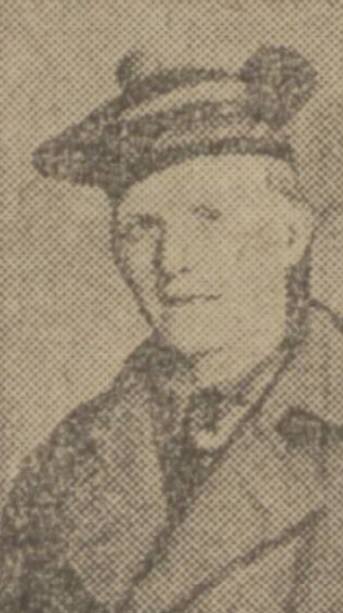 2534 Pte. David Auld, 4/5th Black Watch, was one of the Dundee men who lost their lives on 3 September 1916. Formerly employed in Lilybank Foundry, he lived at 31 Dura Street before the war. Pte. Auld. is commemorated on the Thiepval Memorial, Somme, France, Pier and Face 10A.

“DIED DOING HIS DUTY.” Private D. Auld, whose name appears in the list, was prior to enlistment employed in Lilybank Foundry. He joined the Black Watch shortly after the outbreak of war, and had been at the front for about two years. Deceased was 24 years of age.
Writing to Private Auld’s widow, who resides at 31 Dura Street, Dundee, a comrade pays a glowing tribute to the dead soldier, and says: – “He died like a soldier, doing his duty.” The Courier, Friday, 15 September 1916, 4.

Can you tell us more about David Auld'? Some additional facts, a small story handed down through the family or perhaps a picture or an heirloom you can share online. Contact our curator...