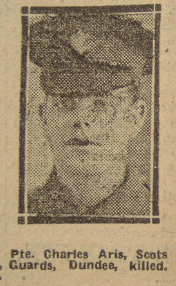 Intimation has been received by Mr and Mrs James Avis, 15 Paterson Street, Dundee, of the death in action of their eldest son, Private Charles Avis, Scots Guards.  Private Avis, who was only 22 years of age, enlisted in October 1915, and went to the front in January last.  Prior to the outbreak of war the deceased was employed with Messrs Francis Stevenson & Sons, dyers, Dundee.

AVIS―Killed in action, on 15th March, Private Charles Avis, Scots Guards, aged 22 years, eldest son of James Avis and Mrs Avis, 15 Paterson Street, Dundee, formerly of Broughty Ferry. – Inserted by his loving father and mother, also by his loving brother David, John and sisters Fanny and Annie, also by his sister and brother-in-law (in Mesopotamia), Mr and Mrs J. M’Keith, and his sister and brother-in-law (in France) Mr and Mrs D. Walker.

Can you tell us more about Charles Avis'? Some additional facts, a small story handed down through the family or perhaps a picture or an heirloom you can share online. Contact our curator...