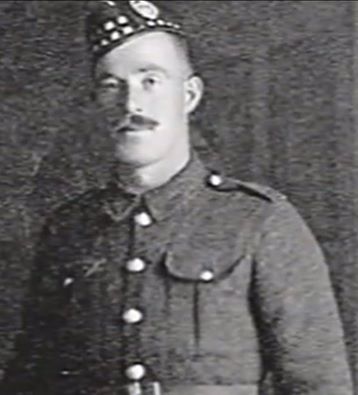 Harry has no known grave but is remembered on the Menin Gate Memorial. Although Harry was originally from Montrose his name was included in the original Honour Roll for Dundee. His service records indicate that $10 a month of Harry’s Army pay was being sent to a Miss Isabella Ritchie of 93 King St, Dundee, who was believed to have been a sweatheart of Harry.

The Crucified Soldier refers to the widespread atrocity propaganda story of an Allied soldier serving in the Canadian Corps who may have been crucified with bayonets on a barn door or a tree, while fighting on the Western Front during World War I. Three witnesses said they saw an unidentified crucified Canadian soldier near the battlefield of Ypres, Belgium on or around 24 April 1915, but there was no conclusive proof such a crucifixion actually occurred. The eyewitness accounts were somewhat contradictory, no crucified body was found, and no knowledge was uncovered at the time about the identity of the supposedly crucified soldier. During World War II the story was used by the Nazis as an example of British propaganda.

British documentary film maker Iain Overton investigated the story of the Crucified Soldier as well as other myths of World War I in his doctoral dissertation and developed them into a television documentary, which was transmitted in 2002 as part of UK Channel 4’s Secret History series. Overton uncovered new historical evidence which identified the crucified soldier as Sergeant Harry Band of the Central Ontario Regiment of the Canadian Infantry, who was reported missing in action on 24 April 1915 near Ypres. Other soldiers in his unit wrote to Band’s sister Elizabeth Petrie to express their condolences; a year later, one of them finally confirmed in a letter to her that her suspicions that her brother had been “the crucified soldier” were true. Band’s body was never recovered, and he is commemorated on the Menin Gate memorial.

The evidence discovered by Overton included a typewritten note by a British nurse found in the Liddle Collection of war correspondence in Leeds University. The note related comments by a Lance Corporal C.M. Brown to his nurse, Miss Ursula Violet Chaloner, whom he told of a Sergeant Harry Band who was “crucified after a battle of Ypres on one of the doors of a barn with five bayonets in him.”

Some accounts erroneously name the soldier identified in Overton’s documentary as “Harry Banks”, thus creating an apparent contradiction in that the only Canadian soldier of that name enlisted in the Overseas Expeditionary Force on 1 September 1915 in Victoria, British Columbia, some five months after the supposed crucifixion

Harry was killed in action and has no known grave, he had 3 years prior service with the 1st Forfar Volunteers and 3 years with the 48th Highlanders.

Can you tell us more about Harry Band'? Some additional facts, a small story handed down through the family or perhaps a picture or an heirloom you can share online. Contact our curator...