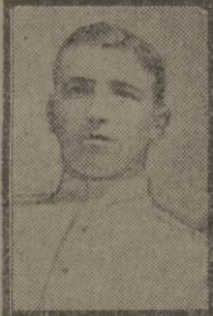 Private Peter Banks, 94 Brook Street, 2d Black Watch, was killed in action on the great engagement of Sunday 9th May.  He was married four days before going to India with his regiment two and a half years ago, and his wife has never seen him since.

Fate has delt so hardly with few soldiers’ wives as with Mrs Banks, 94 Brook Street, Dundee.  Mrs Banks has received intimation of the death of her husband, Private Peter Banks, 2d Black Watch, in action on 9th inst.  Four days after they were married two and a half years ago Private Banks left to rejoin his regiment in India.  Mrs Banks has never seen her husband since.

The news of Private Banks death was contained in a letter dated 12th inst. written by his chum, Private Edward Carroll.  The letter runs :― “I did not know anything about it until the fighting quietened down a little.  Then I was told that he was killed in the charge on the enemy’s trenches.  He is buried in a quiet part of the battlefield with some more of his brave comrades who died in battle.

“I have lost the best chum that any man could wish to have.  I will feel very lonely without him.”

Private Banks was 25 years of age, and served seven years with his battalion.  He travelled to France with the Indian Expeditionary Force.

Can you tell us more about Peter Banks'? Some additional facts, a small story handed down through the family or perhaps a picture or an heirloom you can share online. Contact our curator...