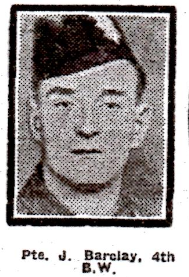 John was an early recruit to 4th BW and deployed with them to the BEF on 14 Feb 1915.  At some stage thereafter he was diagnosed with Chronic Nephritis and evacuated home where he died this day in 1916  in Eastern Hospital Dundee.  His death was reported from Dundee War Hospital of which the Eastern was an annexe.  He is interred in Balgay Cemetery.

Can you tell us more about John Barclay'? Some additional facts, a small story handed down through the family or perhaps a picture or an heirloom you can share online. Contact our curator...