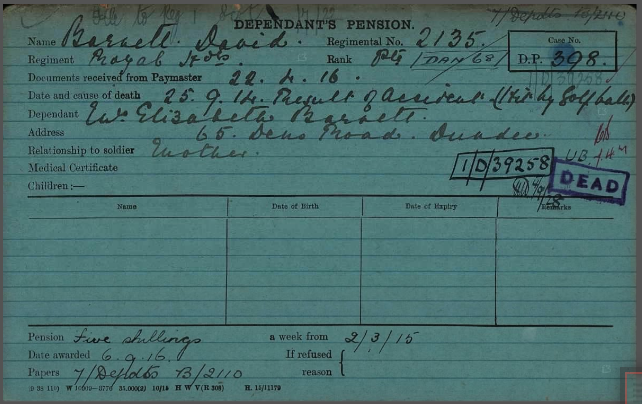 According to his pension record, his death was caused by an accident, hit by golf ball!

On Duty at Wormit is Struck by a Golf Ball,

and Dies from Effects.

A painful tragedy involving the death today (25th September 1914) of a young Dundee Territorial, who joined the colours only a month ago, has taken place at Wormit.

The victim of the sad affair was Private David Barnett, 4th Battalion (City of Dundee) Black Watch, G Company, whose home was at 65 Dens Road Dundee.

The accident occurred yesterday afternoon, but a serious result was not anticipated.  Between three and four o’clock two lady members of the Wormit Golf Club were commencing a competition match on the local course.  Private Barnett was on duty not far from the spot at the edge of the course, when a ball struck off by one of the ladies hit the Territorial on the temple.

Private Barnett was dazed by the accident, but seemed to be little the worse. He was able to walk back to the house where he was being billeted with the assistance of his comrades.

Later he was examined by a doctor, but at that time the injury was not considered serious and his relatives were not informed of the affair.

As time wore on, however, the Territorial became unconscious, and died about four o’clock this morning.  Death was caused through the bursting of a blood vessel.

It was a sad and sudden blow, therefore, to the mother and relatives of Private Barnett when they received news of his death this forenoon.

Private Barnett was only twenty-one years of age.  He was one of the many loyal Britishers who responded to their country’s call on the outbreak of the war.

On leaving school Private Burnett was for several years Post Office messenger, and at the time of his enlistment he was in the employment of Stevenson Brothers, dyers and laundry proprietors.

Much sympathy is felt for the relatives of the young Territorial.

Can you tell us more about David Barnett'? Some additional facts, a small story handed down through the family or perhaps a picture or an heirloom you can share online. Contact our curator...