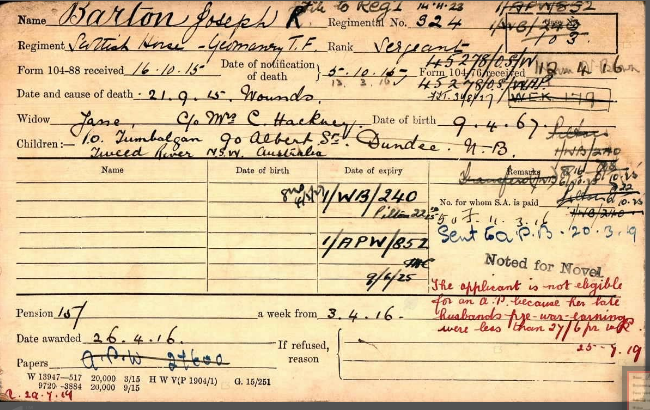 Joseph has no known grave but is remembered on the Helles Memorial.

The name of Sergeant Joseph Richard Barton, 3d Scottish Horse, whose home is at Thomas Street, Carnoustie, has been added to the burgh’s list of casualties.

The gallant sergeant who has made the supreme sacrifice was a native of Cowes, Isle of Wight, and though only 32 years of age had seen considerable amount of military service.  For twelve years he was in the Royal Field Artillery, and for seven of those years was stationed in India.  On settling down in Carnoustie he was employed at Tennant’s Chemical Works, but on the outbreak of war he at once answered the call and enlisted in the Scottish Horse.

Barton comes of a military family.  He has three brothers, one of whom is connected with the submarine service of the navy; another is a member of the Argyll and Sutherland Highlanders, and the third is employed as a shipwright at a Royal floating dock.

Gunner A. Reid, Lowland H.F.A., a brother-in-law of Mrs Barton’s fell at Gallipoli in September.  Her grandfather was killed at Waterloo, while her father was for many years connected with the Royal Marines.  She has also two nephews on active service, one in the Royal Engineers and the other in the 5th Black Watch.

Can you tell us more about Joseph Richard Barton'? Some additional facts, a small story handed down through the family or perhaps a picture or an heirloom you can share online. Contact our curator...