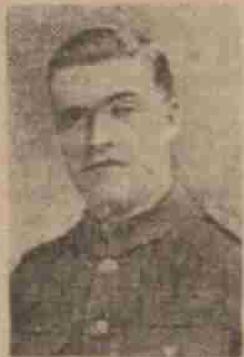 George has no known grave but is remembered on the Tyne Cot Memorial. The C.W.G.C. record this mans surname as Bates, but he is listed as George Bate on a family gravemarker located in Barnhill Cemetery. Brother of Gunner James C. Bate, 16011, Royal Garrison Artillery

Private George Bates, A. and S. Highlanders, son of Mrs Bates, Brook Street, Broughty Ferry, has been wounded in action in France.

Private George D. Bates, A. and S.H. son of Mrs Bates, Brook Street, Broughty Ferry, who was posted missing on 22nd August last, is now reported killed in action on or about that date.  He enlisted in the K.O.S.B. in March 1916, and prior to joining up was a grocer with Mr M’Donald, King Street, Broughty Ferry.  Mr Bates has two sons serving in the army.

Can you tell us more about George Davidson Bate/Bates'? Some additional facts, a small story handed down through the family or perhaps a picture or an heirloom you can share online. Contact our curator...