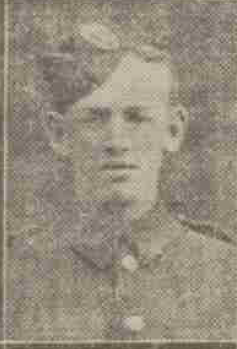 Adam Beaton married Margaret Smith in May 1915 in Glasgow and was employed on the railways as an ironworker in Motherwell where they lived.

The couple had a daughter Elizabeth whom he never saw.

Adam enjoyed only five months of married life before joining the 6th Battalion of the Cameron Highlanders at Inverness between 15-20 October as Private S/21073, followed by training at Invergordon. He then crossed to France in early April 1916. He was wounded near Hulluch in the Loos Sector, some time on the 15th /16th July, and evacuated 5 miles to the village of Sailly-Labourse by field ambulance, then a further 25 miles to the large Casualty Clearing Station at Saint-Omer for intensive care.

Private Adam Beaton died there aged 23 on Sunday 6th August 1916, three weeks after sustaining his injuries, having endured four months of action in France. His sister Jane Ann was then 19 and her first child William had been born two days previously. Adam is interred in Longuenesse Souvenir Cemetery, grave IV.A.31.

Can you tell us more about Adam Beaton'? Some additional facts, a small story handed down through the family or perhaps a picture or an heirloom you can share online. Contact our curator...