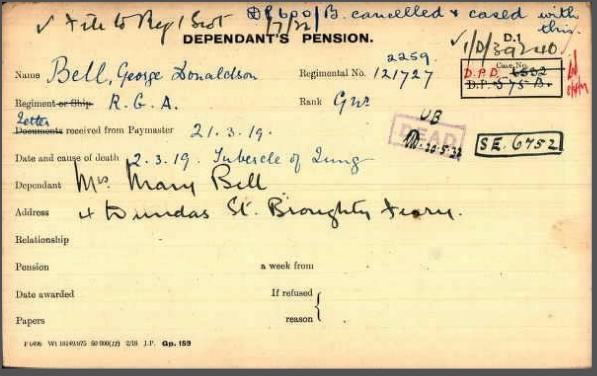 George was born in Monifieth to parents George Bell a Fisherman working out of Broughty Ferry and Mary Bell, (nee Donaldson). He was born on 26th June 1882 in Dundas Street Broughty Ferry, the family home for the whole of George’s life. He enlisted, at the age of 33 years, to the City of Dundee Siege Battery of the Royal Garrison Artillery which was based in Broughty Ferry at that time and previously known as 2nd/ 3rd Coy North of Scotland RGA. His enlistment was on 22 August 1915, being formally attested on 23 August 1915 and having no previous service he will have spent some time in training with this 2nd Line Unit of the RGA.
He was posted to 267 Siege Battery RGA and departed Southampton on 19 March 1917, landing in Havre on 20 March 1917 as part of the Advance Party of that unit. 267 Battery being a Siege Battery were equipped with heavy guns and not easy to move long distances. Hence from the beginning of their War they were based largely in French Flanders and Belgium, Initially at Kemmel on the Southern aspect of the Ypres Salient, layer moving North of Ypres to Groenendyke, then Rousdamme North West of Diksmuide. The Battery then moved South to Argues just East of St Omer and then Caestre near Hasbrouck in January 1918
During George’s time he had a number of minor encounters with Military Medicine firstly being hospitalised in training in Dundee War Hospital with Myalgia being in September 1916 and later in France hospitalised with PUO, (Pyrexia of Unknown Origin), in April 1917 and other minor ailments followed until his admission to hospital in August 1918 with a fistula which required a surgical repair, his recovery from which was problematic with post operative infections which required further surgical intervention. Thus it was on 1 Sep 1918 George was evacuated to UK via Hospital Ship HMHS Carisbrook Castle and ultimately he was admitted to No1 Scottish General Hospital in Aberdeen for further surgery to his fistula. An interesting aside is that on the Ambulance train to Aberdeen he will have passed within sight of his home in Broughty Ferry.
It was during this period that George, whilst in 1st Scottish General Hospital, developed a productive cough combined with Night time fevers and sweats which when examined microscopically and cultured were diagnosed as containing Tubercle Bacilli, Pulmonary TB. After his fistula healed, a Medical Board was compiled and that with the symptomatic Pulmonary TB George was no longer fit for service and was discharged on 27 January 1919. The final note on his Medical Board proceedings was particularly telling. In those days before antibiotics Open and Active Pulmonary TB was inevitably fatal and that final note recommending future treatment simply says “Sanatorium Treatment”
George passed away at home at 4 Dundas Street Broughty Ferry only some 5 weeks or so later on 2nd March 1919
There is an interesting post script to this story,
George’s demise was undoubtedly due to the Pulmonary TB diagnosed in Aberdeen, however was it due to service, my thought would be almost certainly as his register of death clearly states Pulmonary TB 6 months. The living conditions for servicemen like George on the Western Front were such that Pulmonary TB was an ever present risk, (confirmed by the number of servicemen who succumbed to Pulmonary TB after the war but within the timelines to be included as a war casualty and therefore commemorated by CWGC) and it was diagnosed in service and was the cause of his discharge from service

Can you tell us more about George Donaldson Bell'? Some additional facts, a small story handed down through the family or perhaps a picture or an heirloom you can share online. Contact our curator...