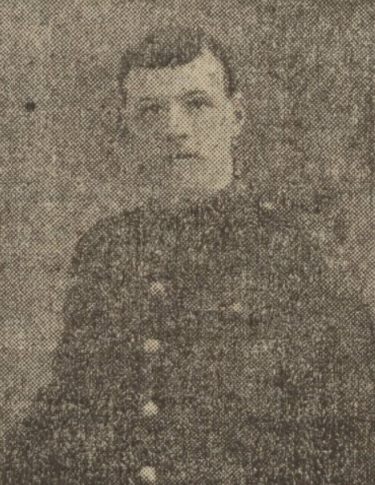 On 25 November 1915, The Telegraph reported on 3760 Pte. George Berry, 4th Black Watch, who had been missing since the Battalion’s ill-fated action at Loos in September.
Married with four children, Berry lived at 13 Kinloch Street, and before the war was employed as a yarn bleacher. He was later confirmed to have been killed in action on 25 September. He is buried in Rue-David Military Cemetery, Fleurbaix, Pas de Calais, France, III. E. 1. His grave bears the inscription ‘IF ANY MAN SERVE ME HIM WILL THE FATHER HONOUR’.

DUNDEE SOLDIER MISSING. Mrs Berry, 13 Kinloch Street, Dundee, is anxiously awaiting news of her husband, Private George Berry, of the second line of the 4th Black Watch. Private Berry was officially reported missing since 25th Sept., and the only news she has obtained was an intimation from a comrade who stated that in the great advance he saw Berry lying wounded. Private Berry, who is thirty years of age, was a yarn bleacher at Claverhouse. There is a family of four children. The Evening Telegraph and Post, Thursday, 25 November 1915, 4.

Can you tell us more about George Berry'? Some additional facts, a small story handed down through the family or perhaps a picture or an heirloom you can share online. Contact our curator...