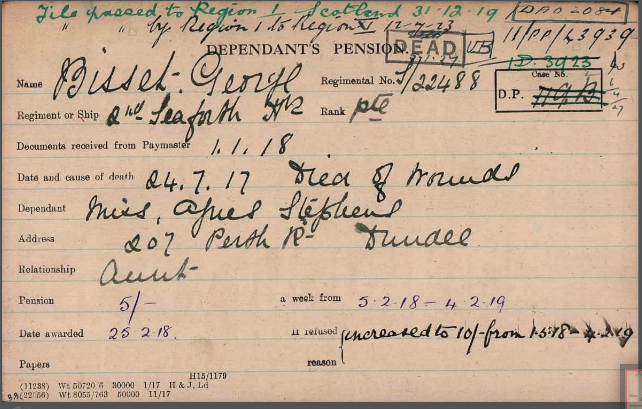 His many friends in Dundee will learn with deep regret of the death at the front of Pte. George Stephens Bisset    of the Seaforth Highlanders,

Pte. Bisset, who was 34 years of age, was a native of Cupar, and was the only son of the late Mr Forbes Bisset, licensed grocer, Burnside, Cupar, but he had been resident in Dundee for a considerable number of years, and lived with his aunt, Miss Stephens, 207 Perth Road.

For seven years he was a member of the staff in the office of the Procurator-Fiscal at Cupar, in which he served his apprenticeship, and he was in South Africa for three and a half years.  Prior to his enlistment at the outbreak of war, Pte. Bisset, was on the staff of the Inland Revenue Valuation Department, Albert Square, where he was esteemed not only as a very competent official, but for his genial and obliging characteristics.

A shell penetrated the dug-out in which Pte. Bisset and three of his comrades were located. Two were killed and two seriously wounded

Can you tell us more about George Stephens Bissett'? Some additional facts, a small story handed down through the family or perhaps a picture or an heirloom you can share online. Contact our curator...