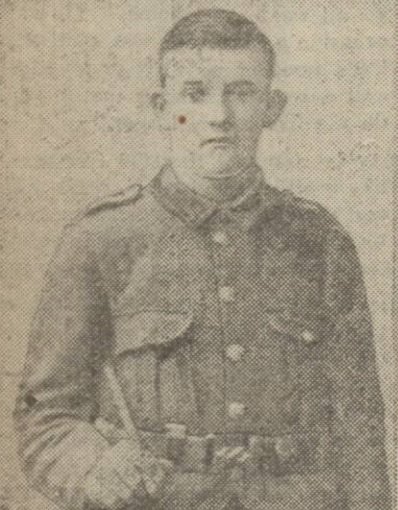 DUNDEE 4TH BLACK WATCH HERO’S DEATH. Private James [sic] Black, of the 4th Black Watch, died in action under sad circumstances. He was only five hours in the trenches when he was killed.
His sister, who resides at 7 Watson’s Lane, Dundee, was first notified of his death about a week ago, when Private Digman, writing to his relatives, stated that Private Black was killed beside him, while a lance-corporal in a letter to his wife said that deceased had been in the trenches only five hours when he was wounded. The lance-corporal stepped forward to bandage him, but Private Black bravely said – “Never mind me. Keep them for some other body. I am gone.” He died a few minutes afterwards.
Private Black’s death was yesterday confirmed by Captain C. M. Couper, who writes: – “It is my sad duty to inform you that your brother, Private J. Black, was killed in action on 9th May. May I offer you my deepest sympathy in your sad bereavement? He had a very short experience out here, but he died doing his duty.”
Nineteen years of age, Private Black enlisted in the 2/4th Black Watch shortly after the New Year, and was included in the second draft to reinforce the 1st Battalion, leaving Dundee on 27th April. The Courier, Friday, 28 May 1915, 6.

Can you tell us more about John Black'? Some additional facts, a small story handed down through the family or perhaps a picture or an heirloom you can share online. Contact our curator...