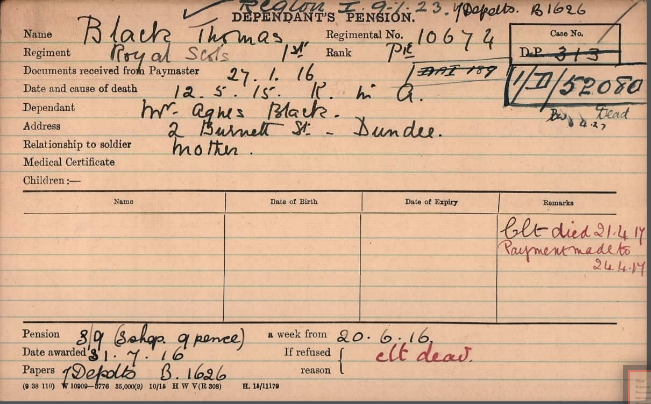 The mother of Thomas Black was my grandmother, the mother of my mother Mary Fields or Black but my mother had a different father in 1907 for the dead soldiers own father had passed away also as a young man. Agnes was a widow and then had my mother, and then she lost her only son, Thomas. My mother’s father was named as Alexander Marr, and my older brother when he was born in 1935 was then called Alexander Marr McLaughlin. He then died in 1982
My mother then had a half brother called Alexander Marr and he married Annie McDermott and they had children, Alex a painter and decorator, Nan, Mary, Christine, (perhaps more) The mother Annie then committed suicide at the 3rd attempt and her husband Alex lived out the rest of his life as a widower and died in a house which I think was in Balunie Drive circa 1962.

Can you tell us more about Thomas Black'? Some additional facts, a small story handed down through the family or perhaps a picture or an heirloom you can share online. Contact our curator...