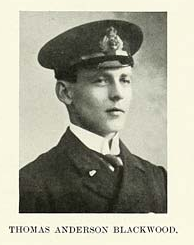 Thomas has no known grave but is remembered on the Chatham Naval Memorial. He was serving aboard H.M.S. Fauvette which was originally built as a Passanger/Cargo vessel in 1912. She was later converted to a Store Carrier/Armed Boarding Steamer. On 9 March 1916 while on her way home from Girgenti to London, she struck two mines in quick succession which had been laid by the German submarine UC-7 (Oberleutnant zur See Georg Haag) off North Foreland and sank in four minutes in position 51.24N 01.29E with the loss of fourteen lives. The wreck remained pointing North and upright on the seabed until after the First World War when it was blown up as it was classed as a maritime shipping hazard with the demolition of the wreck leaving a field of debris on the seabed.

2. De Ruvigny’s Roll of Honour, 1914 – 1919, Volume 2.
Blackwood, Thomas Anderson, Engineer Sub-Lieutenant, Royal naval Reserve, 2nd son of Andrew Blackwood, B.A., B.Sc., F.E.I.S., Head Master of Cowgate Public School, Dundee, by his wife, Jeannie, daughter of Thomas Anderson, of Lochgelly, county Fife ; born Dundee 2 October 1890 ; educated Hawkhill Public School, and Harris Academy there ; Dundee University College (University of St. Andrews) and Dundee Technical College ; served his apprenticeship as an Engineer at Ward Foundry, Dundee, and was afterwards for a time a Draughtsman in Messrs. Vickers’ firm at Barrow-in-Furness ; then obtained a post as Engineer on S.S. Media, where he was serving when war broke out ; was gazetted Engineer Sub-Lieutenant 8 December 1914, and posted to H.M.S. Caribbean, in which ship he served for six months patrolling the North Sea and the Atlantic ; transferred to H.M.S. Fauvette in the Mediterranean ; saw service in Gallipoli, Salonika and the Adriatic, assisting in the transfer of Serbian refugees from Durazzo to Corfu, and was drowned 9 March 1916, when his ship struck a mine off the East Coast. He was a keen sportsman, and a member of the Rhoinach Mhor Cricket and Football Club, Dundee.

A Dundee officer in the Royal Navy has lost his life in his country’s service.  Deceased is Engineer Sub-Lieutenant Thomas A. Blackwood, a son of Mr Andrew Blackwood, headmaster of Cowgate Public School.  Full particulars are not yet to hand, the sad news having been intimated by the receipt of a telegram from the Admiralty conveying the bare information that Sub-Lieutenant Blackwood came by his death on the 9th inst.

The deceased officer was well-known in Dundee, and also in Auchtermuchty, where his family have a summer residence.  He was a keen and able sportsman, and was a member of the Dundee Roincach Mhor Football and Cricket clubs, as well as football and cricket clubs at Auchtermuchty.

Sub-Lieutenant Blackwood was educated at Hawkhill School and Harris Academy, and later attended classes at the Technical College and University Collage.  He served his apprenticeship as an engineer with James Carmichael & C0., Ltd., Ward Foundry.  Subsequently he was for a short time with the Vickers firm at Barrow, and was at sea when war broke out.  Some fifteen months ago he received a commission in the navy.  Deceased was 25 years of age.

Can you tell us more about Thomas Anderson Blackwood'? Some additional facts, a small story handed down through the family or perhaps a picture or an heirloom you can share online. Contact our curator...