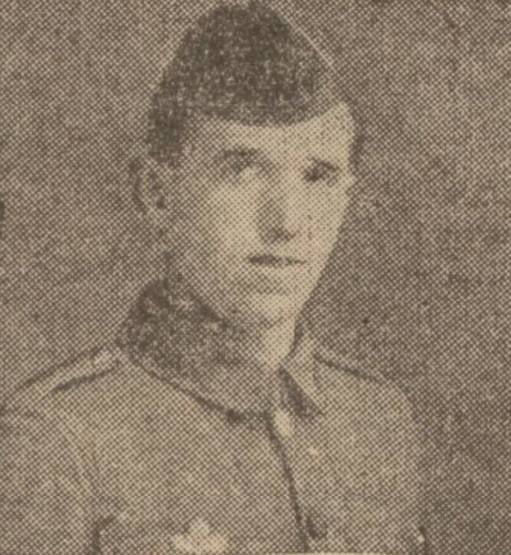 On 21 August 1916, The Courier reported on a Dundee family with six soldier sons. 3901 Pte. Phillip Bonnett, 4/5th Black Watch, 105 Hilltown, died of wounds on 1 August 1916. Pte. Bonnett had been wounded some months before his death, and on returning to the front had been appointed one of the battalion bombers.
An elder brother, 8348 L.-Cpl. Bernard Bonnett, 1st Highland Light Infantry, had been killed in action on 18 March 1915, while two other sons were wounded.
Phillip is buried in Albert Communal Cemetery Extension, Somme, France, I. L. 24. His brother, Bernard, is commemorated on the Le Touret Memorial.DUNDEE FAMILY GIVES SIX SONS TO ARMY. TWO ARE KILLED AND TWO ARE WOUNDED. A second member of a Dundee family which contributed six of its sons to the fighting forces has been killed in action.
Mrs Bonnet, 105 Hilltown, has received official intimation of the death of her husband, Private Phillip Bonnet, Black Watch. Prior to the outbreak of war the deceased soldier, whose photograph is reproduced, was employed as a miner in Alloa. On the commencement of hostilities he enlisted in the R.F.A.
After serving in that regiment for some time he was discharged. Private Bonnet, however, again offered his services, and on being accepted joined the Black Watch. He was wounded a few months ago, and on returning to the firing line was made a bomber.
A brother of Private Bonnet was killed some time ago, two brothers are at present lying in hospital, and two are still serving, one being at the front. The father of the soldiers served in the army for 20 years, and came through the Zulu war. Although about 70 years of age he offered his services at the commencement of the present campaign. The Courier, Monday, 21 August 1916, 4.

Can you tell us more about Philip Bonnett'? Some additional facts, a small story handed down through the family or perhaps a picture or an heirloom you can share online. Contact our curator...