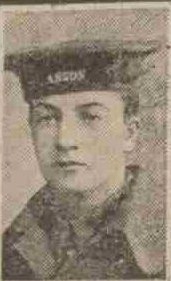 Alexander has no known grave but is remembered on the Tyne Cot Memorial.

A.S. Alex. Boothroyde, a well-known Dundee football player, has been wounded for the second time.  Mr John Boothroyde, 29 Constitution Street, Dundee, has received intimation that his son had been admitted to hospital suffering from gunshot wounds in the arm and left leg.  Alexander, who is 20 years of age, was previously wounded in the Gallipoli campaign.  Prior to enlisting in the Royal Naval Division, he was employed with Mr William Adamson, wirework manufacturer, Nethergate.  He was also a prominent football player, having played at centre forward for Celtic.

Can you tell us more about Alexander Boothroyde'? Some additional facts, a small story handed down through the family or perhaps a picture or an heirloom you can share online. Contact our curator...