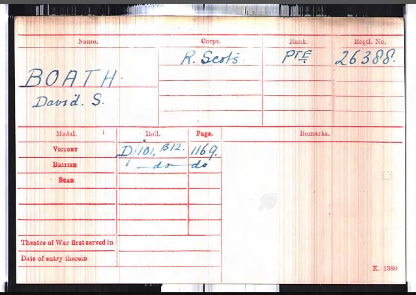 David Shepherd Boath was born in Dundee in 1883. He enlisted with the Royal Scots in August 1915 where he was in the reserves. He was later transferred to the 15th Battalion in March 1917. Boath was captured on the 28th April 1917 during the Arras campaign and spent the rest of the war in a Prisoner of War camp. He returned to the UK on Christmas Day 1918 and died in 1973.

Can you tell us more about David Shepherd Boath'? Some additional facts, a small story handed down through the family or perhaps a picture or an heirloom you can share online. Contact our curator...