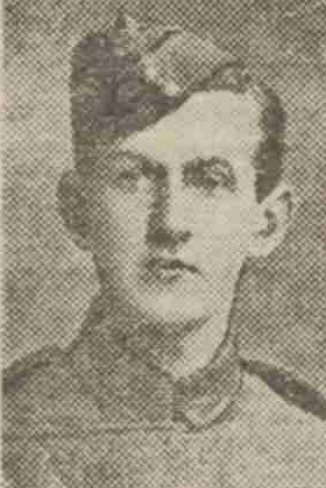 It is suspected that Alexander signed up before he was aged 18. Ian was a former pupil of Grove Academy, Broughty Ferry, and is remembered on the School Great War Memorial. Alex was the brother of Sgt James L. Boyack, 58537, Royal Air Force.

Sergeant Ian Boyack was an observer with 49 Squadron. He was killed on 5 June 1918 when his DH9 aircraft (serial number D7233) crashed into a tree returning from a bombing raid on Roye, France. The Pilot, Lieutenant Cameron Alexander Bell Beattie survived the crash.

A report in The Courier of June 12 1918 carried the sad news of the death of Alexander Boyack under the headline “Broughty Airman killed”. It states: “Flight-Sergeant David Smith, RAF, son of Mr William Smith, Jolly’s Hotel, Broughty Ferry, writing to his parents, in a letter received yesterday, states that Sergeant Observer Alexander Ian Boyack, RAF, son of Mr Alexander J. Boyack, Links Villa, King Street, Broughty Ferry, was killed on the 5th inst. in the course of an aerial flight. It appears that the machine in which deceased was flying formed one of a squadron and being in the rear was attacked by three enemy machines and driven down, but the pilot succeeded in reaching the British lines. Sergeant Boyack joined up in October 1917, and had only been in France one month. He was in his 19th year, and on enlistment was a clerk in the shipping office of David Alexander & Sons, Limited, King Street, Dundee. An elder brother is serving in the RAF.” The son of Alexander J. Boyack and Isabella Watson, the teenager followed in his father’s footsteps when he took up work as a clerk for a merchant shipping company. After enlisting in October 1917 he served as part of the RAF’s 49th Squadron. He is commemorated on the war memorial in the East United Free Church, Broughty Ferry. This church is still in use as a place of worship and is now known as Broughty Ferry New Kirk, 370 Queen St, Broughty Ferry.

Can you tell us more about Alexander Ian Boyack'? Some additional facts, a small story handed down through the family or perhaps a picture or an heirloom you can share online. Contact our curator...