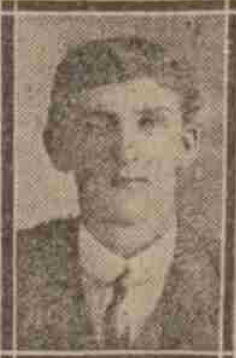 Joseph Brady initially enlisted to 5th Bn Black Watch and allotted the number 1153 for that battalion,  at some stage thereafter he was embodied in the 6th Bn.  The absence of his service record makes it difficult to ascertain a timeline for this and the fact that other surviving documentation fails to identify any specific timelines make it nigh on impossible,   However some assumptions can be made based on the sparse detail that remains.  We know that after the amalgamation of 4th and 5th Bns in France that a surplus of manpower under command of Capt E Boase,  previously 4th Bn BW,  we returned to Highland Div and Cyclists Base depot near Rouen, where they would form a source for immediate battle casualty replacements for the parent Bn,  (the 4/5 BW).  However it quickly became the depot in France for the immediate battle casualty replacements for all BW Bns in France and Flanders,  Hence a number of these were sent to Bn’s other that 4/5 BW.  Notably to 6th and 7th Bns serving in the 51st Highland Division.   Indeed Captain Boase and a number of his men from the original 4th and 5th Bns were serving in 7th Bn BW at High Wood on the Somme when they made their final sacrifice on the field of battle,  just a few weeks before Joseph succumbed at Beaumont Hamel.
It is not certain that Joseph followed the route from the point of amalgamation of 4th and 5th Bns in France as his medal index card gives no date of entry to the BEF theatre but perplexingly it is 5th Bn Regimental Number on the Medal Index card not his 6th Bn Number, another confounding feature is that there is no record of a 14 Star or a 14/15 Star on his Medal Index card.   The 5th Bn deployed initially in Nov 1914  with drafts of replacements through the remainder of their existence which would make those who served then entitled to one of those stars which would be recorded on the Index Card.  In Josephs Index card we can see this is not the case and it is conceivable that he was sent to 6th Bn straight from UK .
The Battle of Beaumont Hamel is very well documented and we know that Josephs 6th Bn were in the front line pushing towards objectives of Y Ravine and then on to Station Road, Beaumont Hamel with elements of their sister Bn the 7th BW following up in support with ammunition.   He met his end on that very famous battlefield,  a famed Battle Honour for the 51st Highland Division.   He now lies in that intimate little cemetery of on 46 known burials in what was said to have been a shell hole on the field of battle.
On the monument to 51st Highland Div which is alongside this cemetery are the Gaelic words
La a’Blair s’math n Cairdean
Which translated to
Friends are good on the day of Battle
This is particularly poignant as Joseph now lies with 6 other Dundonian Black Watch men among the 46 others in Hunter’s Cemetery.

Private Joseph Brady, Black Watch, whose relatives reside at Burnett Street, Dundee, has been killed in action.  Private Brady was prior to the war a member of the Territorial Force, and was called up at the commencement of hostilities.  He had been at the front for about two years.  Before enlistment he was engaged as a jute mill overseer with Messrs Scott & Sons, Dundee.  He was 29 years of age.  Two brothers are serving with the colours, one in the K.O.S.B., and another in the H.L.I.

Can you tell us more about Joseph Brady'? Some additional facts, a small story handed down through the family or perhaps a picture or an heirloom you can share online. Contact our curator...