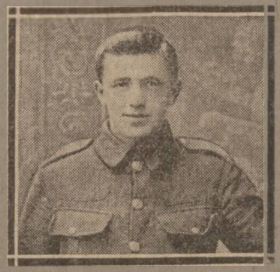 STORMED TRENCHES AND DROVE OUT GERMANS. “MAGNIFICENT CONDUCT DESERVES PRAISE.”
In connection with the death of Private John Brady, Royal Scots, eldest son of Mr Thomas Brady, 75 Brook Street, Dundee, an officer wrote to his parents:— “How magnificently he and so many others stormed the trenches and drove out the Germans deserves the highest praise. You will be pleased to know that your son died doing his duty to the last. His loss will be keenly felt, as he was a great favourite in the company.”

Private Brady, who was 21 years of age, was shot by a sniper when between the first and second German lines. He joined the forces in the early months of last year, and had been at the front since August.

A brother, Private James Brady, who is 18 years of age, is in the Cyclist Battalion.
Dundee Courier 10 August 1916

Can you tell us more about John Brady'? Some additional facts, a small story handed down through the family or perhaps a picture or an heirloom you can share online. Contact our curator...